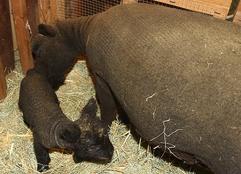 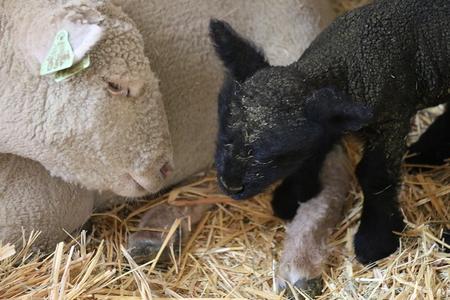 Lucy's twins, a ram and a ewe 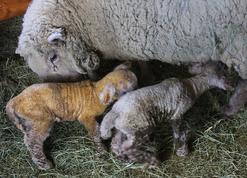 That makes seven ewes, four rams and three wethers for 2019, not including the little ram and three ewes that sadly did not survive. Of the surviving lambs, three of the ewes and one wether are black sheep, four rams, four ewes, and two wethers are white, and and one of the four rams is uncommonly handsome.

Photos of the lambs are posted on their dam's web page, accessible via the submenu above. 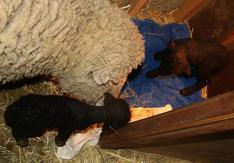 March 17 Daffy, bred to Tuxedo, lambed twin black lambs, a ram and a ewe. The ram, not being an RR genotype, was wethered.

March 19 Fiat, who was bred to Tuxedo, went into labor but was unable to deliver her triplets. A vet arrived in time to save Fiat but not her.stillborn white ewe, black ewe, and black ram---a river of tears.

March 21 Marguerite, who was bred to Mario, lambed white twins, a ewe she delivered breech and a ram. On her last night in the lambing jug she rolled over onto the little ewe and smothered it. More tears. Her ram, not being RR, was wethered.

March 24 Lucy, who was bred to Little John, lambed white twins, an RR ram and a ewe.

March 27 Dorothy, who was bred to Mario, lambed white twins, a ram and a ewe. Her ram, not being RR, was wethered.

March 28 Scooter, who was bred to Little John, lambed twin white RR rams.  One of her rams is so handsome, with such beautiful coloration and markings on his face and legs, that he may be offered as a mature stud at a premium price after he produces a ram lamb.

April 20, Holy Saturday, Pirella, who was bred to Leo, a recently purchased 5-year-old black ram, lambed a beautiful black ewe with a startling very obvious cross on her forehead of the mud remaining after Pirella finished cleaning her off.

May 2 Poko, who was bred to Tuxedo, lambed a black ewe that was so much the spitting image of Pirella's lamb that Pirella kept pacing back and forth outside Poko's lambing jug bleating and snorting her indignation that her lamb appeared to be in there with Poko until her lamb was brought to her so that she could sniff it.  Even then she proved a difficult ewe to convince until well after she had nursed her own lamb a few times, returning several times to Poko's jug to puzzle over the little black lamb in there. 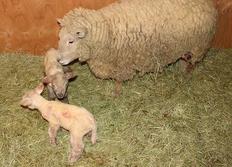 Dorothy's twins,  a ram and a ewe

Daffy's twins, a ram and a ewe 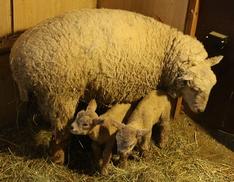 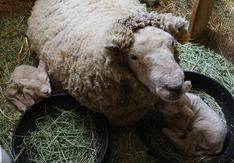 Marguerite's twins, a ewe and a ram 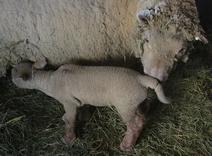 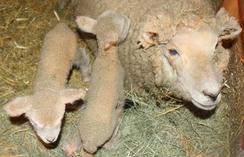